Bucharest Henri Coandă - Otopeni Airport is located at about 7 miles north of Bucharest, the capital of Romania, it is the main international airport in Romania. It has become the busiest airport since Baneasa Aurel Vlaicu Airport (LRBS) was converted into a general aviation airport and all low cost operations were moved to Otopeni. Traffic consists of medium aircraft (mostly from A320 and B737 families) with seldom heavy arrivals.

DEL is responsible for approving Flight Plans and reading clearances.

GND is responsible for control of air traffic on the aprons and taxiways, such as start-ups, pushbacks and taxi.

TWR is responsible for air traffic service on the runways and in Otopeni Control Zone for VFR traffic which fly in it. Otopeni CTR is classified as Class C airspace, both IFR and VFR are allowed to enter.

APP is responsible for air traffic service in TMA Bucharest, classified as Class A airspace, where only IFR flights are allowed to enter. 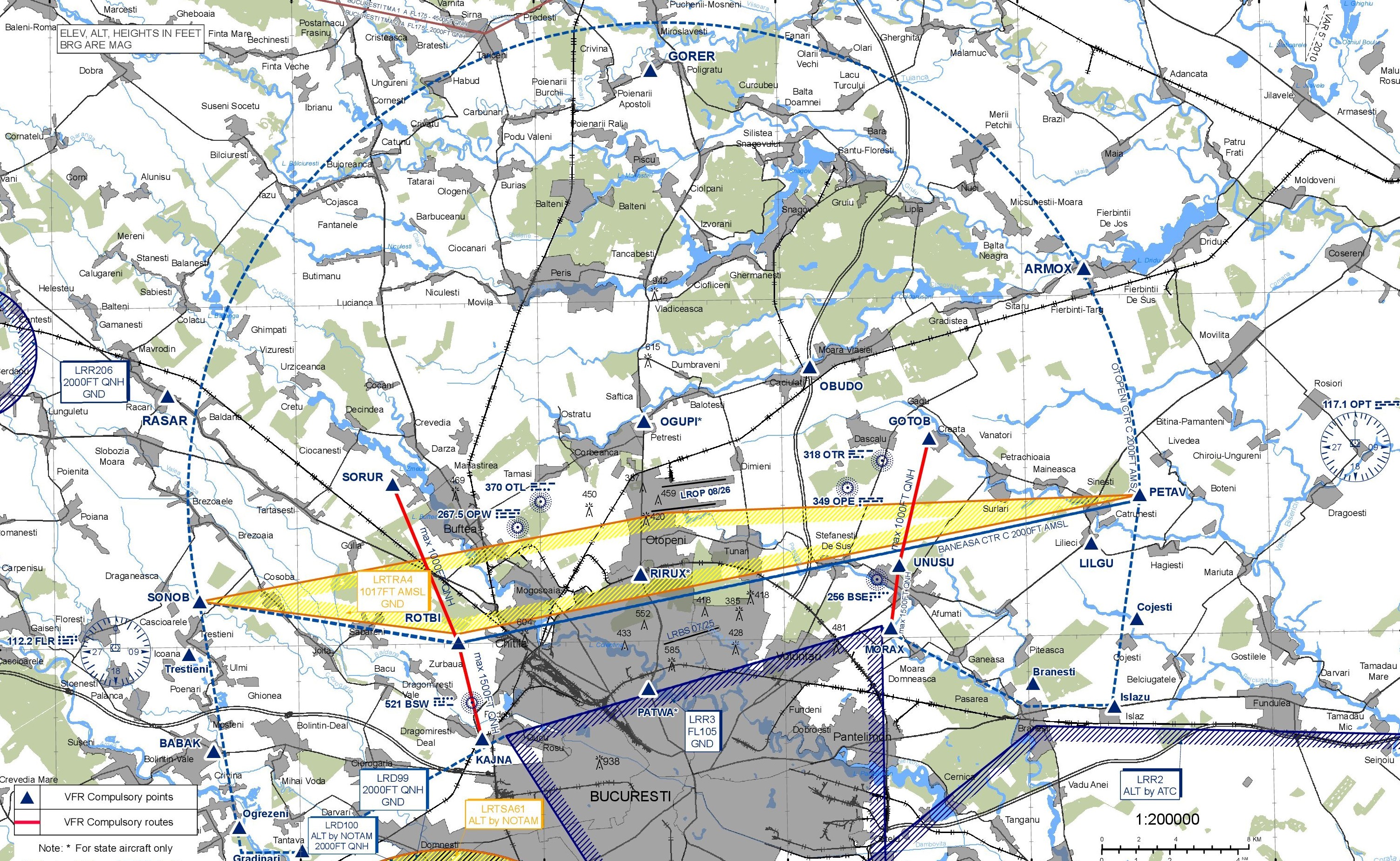 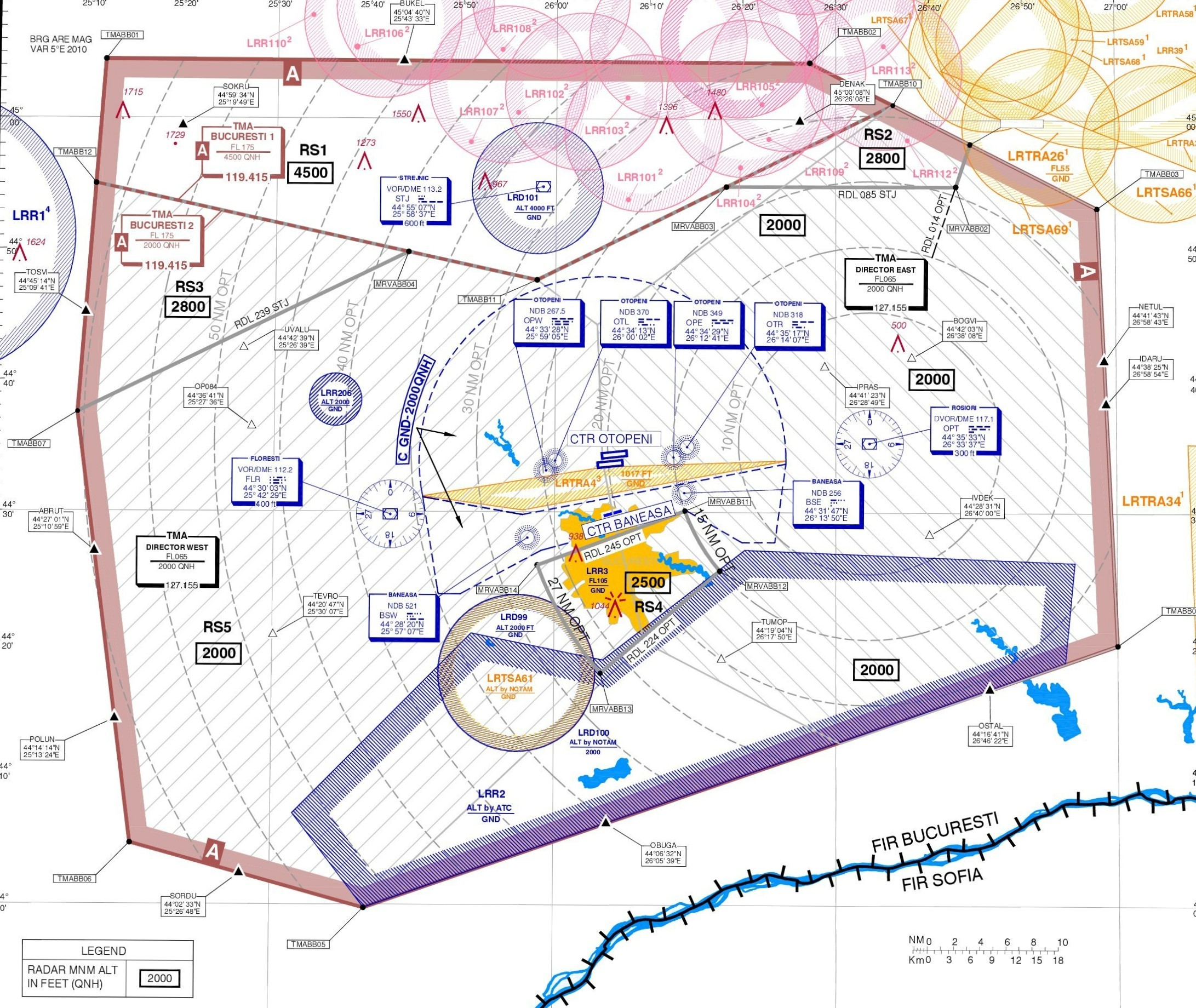 TWR is responsible for updating and maintaining Otopeni ATIS. Also GND is allowed to connect ATIS, when TWR is not online.

For operational purposes (short taxiing distance from apron to runway and heavy amount of traffic from the west part of the airport) it is preferred to use direction 08. Thus, if the wind does not exceed 6-7 kts, favorable for direction 26, direction 08 is kept in use.

Aircraft with code higher than aerodrome code 4D (wingspan greater than 52m and outer main gear wheel span OMGWS greater than 9m) shall vacate RWY 08R via TWY D, otherwise, shall wait for towing and will shut down engines 1 and 4. If aircraft code is less than 4D, pilot may decide to do backtrack using turn pad 26L and vacate runway via TWY D.

Operational use of intersection take-offs: all jet aircraft must use the full runway length available for noise abatement reasons. Take-offs from intersection with taxiway may be allowed at ATC discretion (for operational reasons) or pilot request. TWY V and TWY W are exit only taxiways. From TWY W and TWY V is not allowed to take-off.

In general, RWY 08L/R are both used for departures and arrivals. 26L shall be used for arrivals and 26R for depatures.

The aircraft is cleared to taxi from GND. GND handoffs to TWR when the aircraft approaches the holding point. It is drawn before the runway entry with a yellow line, perpendicular to the taxiway axis.

Taxiing of aircraft with wingspan greater than 52 m is not allowed on TWY C.

TWY W and TWY V are used only for vacating runway. Do not instruct aircrafts to enter runway via TWY V or TWY W.

It is generally at the discretion of the ATC.

RWY 08R is authorized for CAT IIIA operations (RVR not less than 200 m) and guided take-off. RWY 08R is the main runway used during LVP.

RWY 08L is authorized for CAT II operations (RVR not less than 350 m) and guided take-off.

RWY 26L/R are authorized for CAT I operations and LVTO.

In real life, LROP airport is closed for VFR traffic.

On VATSIM, VFR traffic is permitted to fly at LROP.

VFR aircrafts shall request clearance from DEL. The maximum cleared altitude which a VFR could climb in CTR Otopeni is 1500 ft (AMSL) by QNH, to maintain the minimum vertical separation between aircrafts in (minimum descend at 2500 ft by QNH) and below TMA.

Traffic pattern is allowed only in the North side of the airport and performed only on runway no. 2 (08L / 26R).

In the South of Bucharest Henri Coanda Airport, there is LRTRA4 area, restricted area activated by ATC from the ground until 1017 ft AMSL. If it is active, arrival traffic at runway no. 1 (08R/26L) will not be affected.

TWR Unit shall control VFR traffic which fly in CTR Otopeni. Below, you can read the chart used by VFR pilots around Otopeni Airport in CTR Otopeni and CTR Baneasa.

In CTR Otopeni, ATC expects pilots to know the class of airspace, VFR reporting points and runway crossing routes. OGUPI-RIRUX is used only by state aircrafts (SMURD, MAE, MAI, SRI - helicopters). SORUR-ROTBI and GOTOB-UNUSU are available only at 1000 ft AMSL (by QNH).